The Sunshine Coast Falcons will take to the field for the first home game of the 2022 QRL season this weekend with the backing of Sunshine Mitre 10, one of the largest independently operated hardware suppliers in Queensland. Following their sponsorship of the club in 2021, Sunshine Mitre 10 have signed on for a 3-year partnership.

Sunshine Mitre 10 general manager Neil Hutchins said the Falcon’s sponsorship was part of the organisation’s commitment to supporting local sporting and community organisations where they operated. Sunshine Mitre 10 will celebrate the opening of their new flagship store at Nambour on Saturday 24th July, with Block TV star Scott Cam as well as 2020 series winners Jimmy and Tam there to celebrate, with huge specials and giveaways throughout the day.

“The store at 980 Nambour Connection Road will employ 40 staff and offer the latest variety of products to our retail and trade customers,” Mr Hutchins said.

“To celebrate, we are having a huge opening day on Saturday 24th July.  The store will open at 8am and we have a catalogue full of great specials.

“At 10am Scott Cam, host of The Block, as well as 2020 series winners, Sunshine Coast locals Jimmy and Tam, will officially cut the ribbon and open the store.  They will be around until 12noon to chat to fans and take photos.”

Sunshine Mitre 10 invests in lifesaving defibrillators for every store

WITH 18 stores throughout Queensland, Sunshine Mitre 10, one of the largest independently operated and owned hardware suppliers in Queensland, have invested in lifesaving defibrillators for all its stores. Sunshine Mitre 10 general manager Neil Hutchins said the defibrillators were an investment in emergency health care not just for their staff, but also for the communities in which they operate.

“We have over 400 staff across our locations, and we take our duty of care very seriously so we have first aid officers at each location, and now we also have defibrillators which can help save lives for anyone experiencing a sudden cardiac arrest,” Mr Hutchins said.

“But it’s not only that, many of our stores are in regional and remote locations so by having a defibrillator on-site, it also makes these lifesaving devices more accessible to the local communities.

“And while it’s a very big investment, if we can save just one life, it will be money very well spent.” The sale marks the launch of the new precinct within the thriving Stockland Aura Business Park.

This new purpose-designed Trade and Construction Precinct, ideally positioned alongside the Bells Creek Arterial Road which will shortly be directly connected to the Bruce Highway, will house key brands in the construction and trade industry to create a one-stop destination for all tradespeople and residents’ construction supply needs. 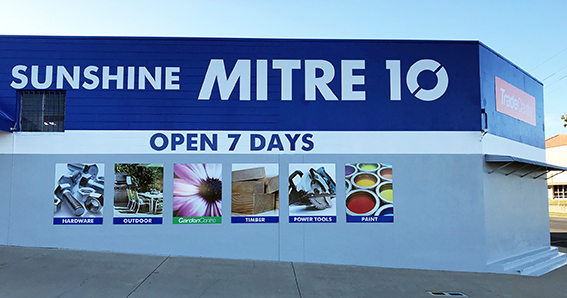 The new Sunshine Mitre 10 will be a frenzy of activity this Saturday, 26th May, with its massive grand opening sale. There will be something for everyone with incredible not-to-be-repeated prices on everything from irons and kettles to barbecues, bar fridges and treated pine sleepers.

Starting from 8am, the crew from Hits 93.9FM will be there and there will also be free hot dogs, a sausage sizzle, a coffee van, as well as face painting for the kids.

One of the major suppliers of the new Bloomhill Centre extension has furthered their contribution, donating $5,000 to the Buderim-based charity.

Sunshine Coast Mitre 10 was responsible for the supply of timber, fixings, cladding and doors for the new extension and was eager to show its ongoing support for the worthwhile charity organisation.

Bloomhill’s new General Manager, Mervat Thompson accepted the donation on behalf of Bloomhill and said the charity was really appreciative of support.

“Bloomhill relies on the support we receive from local businesses and the community and we hope to continue out relationship with Mitre 10 and Accord Homes,” Mervat said.

“In fact, we have plans to work together again to renovate the older section of the Centre in the near future,” Mervat said.

Bloomhill Cancer Help is a local charity that provides support and assistance to those affected by cancer. Operated by a team of dedicated professional staff and hundreds of volunteers, Bloomhill offers counselling, transport to appointments, respite care and a range of complementary therapies and other practical help.

Accord Homes, builders of the extension and long-time supporters of Bloomhill, coordinated the donation with Mitre 10, having worked with the company for many years, including on other charity projects.